Xi Jinping, President of China, has made huge efforts to consolidate his power within the Chinese Communist Party. These efforts include an massive anti-corruption campaign, stricter internet censors, and construction of a cult of personality. Just this month, the National People’s Congress of China acted to remove Presidential term limits from their Constitution. President Xi is on a path to becoming a very powerful dictator. This is not an altogether unexpected development, but is a development should be monitored closely by the international community and by proponents for democratic ideals. Should Xi continue to grab power, China’s score will fall further in standard democratic indices over the next few years.

Xi is quickly rising to make himself a leading figure of political ideology, the likes of Mao Zedong or Deng Xiaoping, with many Party members alluding to “Xi Jinping Thought” as a way to refer to Xi’s political ideology in these past months. In addition to raising a cult of personality around himself, he has spearheaded a wave of arrests for alleged corruption of various Party officials. This is the single largest anti-corruption campaign since the inception of the current Chinese government with Mao, further increasing Xi’s credibility as a successor to Mao, but also removing opponents and potential threats. The government is also cracking down on social regulations. There has been a recent increase in internet restrictions which included for a time – and this is entirely true – a ban on the letter “n”. [See above for humorous title which you thought was a result of bad proofreading.] Supposedly this is because of the math inequality “n>2” where “n” refers to the number of terms of his presidency. Winnie the Pooh has also been banned, on account of images like this, 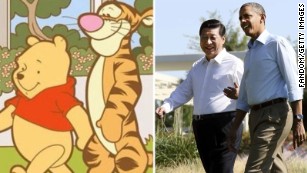 implying that Xi is like Winnie the Pooh. The social credit program being headed up by Tencent will be mandatory for all Chinese citizens by 2020. This social credit program is similar to the US credit score, which assigns each person a number based on past activity. However, this social credit score will reflect how compliant and loyal to the party line a citizen is. For example, it will monitor all social media, and should someone post good things about the government, Mao, or some otherwise Communist Party friendly material, his/her score will go up. If you share something related to something like Tienanmen Square or Winnie the Pooh, your score will go down. Something especially chilling about this is the guilt-by-association mechanic, where having friends (like Facebook friends) with low scores will bring down your score, encouraging social isolation and stigmatization of those who deviate from party lines. Those with a higher credit score will receive added bonuses, such as expedited paperwork. There is no penalty for having a low score… yet. They may well introduce punishments like fewer social privileges or even forfeiture of property and freedom. These policies are centered around socialist ideas of repression and control, which will increase under these policies.

It is important to note that China is by no means a democracy. Though many of their government functions (such as the National People’s Congress) appear to act as voting bodies, and despite some recent liberalization of China’s economy, the individual citizen in China has a laughable quality of political representation. In the most recent Polity data series – Polity IV – China is ranked at -7 (via systemicpeace.org) and in 2017 had a score of 3.10 on the Democracy Index (via The Economist). Though it may be considered a stretch to consider this to be democratic backsliding, this increase in authoritarian power is absolutely a topic of some concern and shares many symptoms with backsliding democracies. This example of Jinping increasing his power as an executive as a “President for Life” is a classic example of super-presidentialism. Steven Fish, based on case studies of post-communist presidents, concluded that whenever executives consolidated power, it directly led to decreased Freedom House Index scores. This is a “political leadership” explanation for backsliding; in this case, Xi Jinping is personally leading efforts to increase authoritarian policy.

This super-presidentialism compounds on the existing political structure of the Chinese government. There is a single dominating Party – the Chinese Communist Party – in the Chinese government, which allows no competing parties, which in turn highly restricts democratic processes. The Chinese government is highly centralized around this one party, and Xi’s proposed “reforms” will result in further integrated Party and government functions. The purpose of this post is in particular to highlight the increasing power of the authoritarian regime of Xi Jinping, but is also important to remember that this is not democratic backsliding, as the already-existing dominating political structures are authoritarian as well. In light of many recent international event, including a notable rise in the number of populist and nationalistic movements and successful populist and nationalistic candidates, it may seem as thought the world is becoming more divided. However, many of these countries are democratic, and with the predicted rise in authoritarianism in China, it may be that divided countries may unite and put international pressure on China to ease the iron grip on its people.