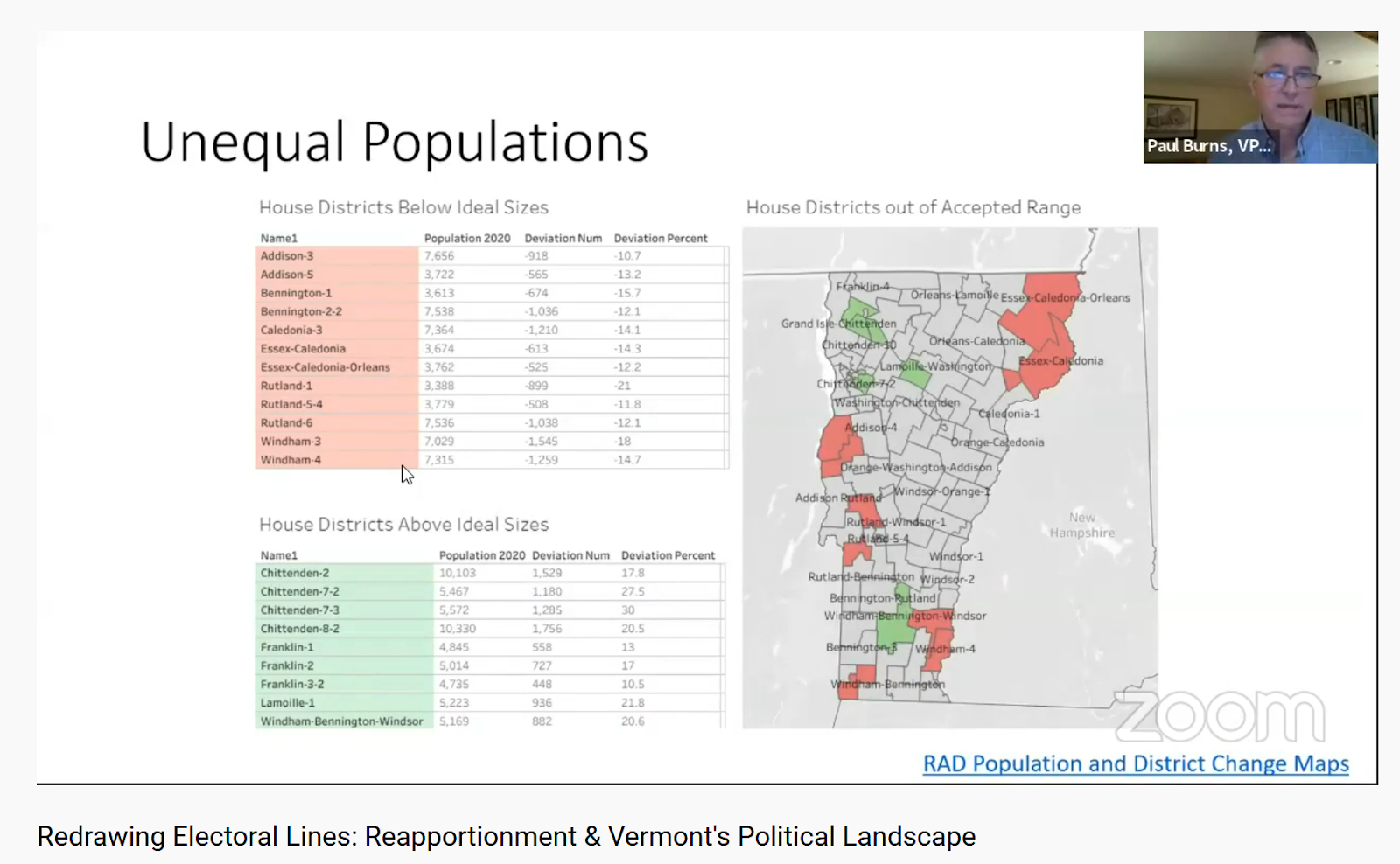 While many commentators across the nation have called redistricting “the bloodsport of politics”. In Vermont, redistricting has been a relatively placid affair. It serves more as a decennial “finger stick test of politics” than the protracted legislative and legal brawls you see play out every decade in other states. At least not since 1965, when the Supreme Court overruled Vermont’s previous one-town-one-representative rule. Meaning that, no, Burlington (1960 population: 35,531) and Victory (1960 population: 46) can not have the same level of representation in the State House. This year, however—because of a few great forces beyond their control—the Vermont apportionment board will likely be forced to draw a map that will leave no one happy.

On a waning day in September; logging onto an afternoon Zoom forum with about 25 or so active Vermont citizens one could spot the early wake of shiting tides. The forum: Redrawing Electoral Lines: Reapportionment & Vermont’s Political Landscape was co-hosted by former State Representative Kiah Morris, now the current director for the political activist organization Rights and Democracy, and Paul Burns, executive director of VPIRG, a community and environmental advocacy non-profit. Serving on a panel with them were two members of the apportionment board as well as board chair Tom Little.

Shifting Populations. The number one issue the apportionment board is tasked with is finding out just how many people live in our towns and then how best they can be equally divided 150 times. Like much of the country, Vermont is facing an urban-rural divide. As more and more people move to Burlington and its suburbs the rural population outside of a few ski towns continues to stagnate and actively decreased in a handful of post-industrial towns in Central Vermont.

This presents a challenge with no easy answers for the intrepid apportionment board members. Many of them come from these rural communities that so strongly characterize Vermont’s culture. Redistricting from the outside looks like a simple jigsaw. Just figure out which communities fit together the best and slot them in there. However, with every addition comes a subtraction in redistricting. To correct population imbalances for districts in the red the board is going to have to expand them outwards. Taking people out of their neighboring districts and forcing these districts to enter the red and so on and so forth. This decade, in particular, could see many towns split apart. A major sticking point for Vermonters who see themselves as members of a town first, before things like county, region, neighborhood, etc.

The famous Stowe, for instance, in the first time in its 230-year history is too big to justify being represented by one member in the Vermont State House. But while Stowe’s robust growth this decade means it is too big for one district it is still far off the mark of justifiably having two districts. Meaning that a neighboring town is going to have to snake through the mountain roads to take some of Stowe’s excessive population. The prospect of sharing what will likely be a full third of their district with hoity-toity Stowe residents is not something that any of its neighbors look forward to.

New Communities of Interest? In another historic change, the 2020s will be the first decade that Vermont can boast people of color being in the double digits of its population. While still only making up a measly 10.2% of the population this change is big by Vermont standards. The organizers of the forum asked that members of the apportionment board please take the historic opportunity to create districts that could correct the long-running under-representation of minorities in Vermont. Currently, people of color make up only 3% of the legislature while now constitution 10.2% of the state. This matter is of particular importance to forum host Kiah Morris, who was the only Black woman in Vermont’s legislature until she resigned in 2018 after years of racial harassment and threats of violence. It is hard to create a majority-minority district anywhere in Vermont. The numbers just aren’t concentrated enough in any specific part of the state. But perhaps the board will move to create a new district in the immigrant and refugee-heavy areas of the North End of Burlington and its neighboring city across the river in Winooski. Winooski was able to boast pridefully in 2019 when its district became the first to be represented by two people of color. Following the appointment of Black community organizer Hal Colston and the re-election of Latinx Representative Diana Gonzalez.

One Member-One District. The apportionment board’s final challenge will be whether it decides to change the fundamental composition of districts themselves. The State Senate in Vermont was created to represent the interests of counties, something that has grown rather nebulous as Chittenden County continues to expand and dominate the rest of the state. Like a few other states in the nation, Vermont allows for there to be districts with multiple members. What makes Vermont unique is the sheer size of these multiple-member districts. Rather than break up Chittenden County’s single district the legislature continued to kick the can down the road by simply expanding the number of members the district sends to the State Senate. Making the Chittenden County State Senate the largest district in the country in terms of its member size. Chittenden County elects a grand total of six members every year at-large. Creating a free for all every general election and primary season. Especially when an incumbent retires. This also means that while State Senator Dick Mazza (D-Colchester), for example, represents a single-member district of about 20,000 people. The State Senators from the Chittenden County district all represented 156,545 people at the start of the last decade and only would have had more constituents this decade if not for a bill finally breaking the district up that passed in 2019. This is not the only multi-member district in the State Legislature either. There are two three-member State Senate districts, a dozen two-member State Senate districts, and about half of the State House is composed of two-member districts. The apportionment board is now legally required to break up the Chittenden County district into at least groups of three. But with this victory, progressive groups are advocating that the state switch to solely single-member seats. Because the burden for running in a district exponentially increases with every additional member. Something many progressives and advocates for grassroots democracy believe hampers candidates with little money or name recognition.
One of the few sources of tension in the night and indeed in the whole redistricting process is the repeated call by the organizers to break up the multi-member districts. While the vast majority of apportionment board members (as well as the Vermont public) say they support the idea. The board members are reticent to confirm that it will be something that can be achieved this year. A) because it would potentially mean partitioning many towns for the purpose of equalizing populations and B)the one group that it would be guaranteed to rue the day of is incumbent politicians. And they have the final say.