Gerrymandering is an issue that has not only stretched through US history in different ways but is something that continues to be a problem in the United States’ political system today. Merriam-Webster defines gerrymandering as the practice of dividing or arranging a territorial unit into election districts in a way that gives one political party an unfair advantage in elections. What this definition doesn’t include is that gerrymandering is not specific to political parties but any class or group of people, including race. Gerrymandering is when a certain district is manipulated so that a certain class or group is unfairly represented. There are two main ways this is achieved: packing and cracking. Cracking is when a district’s voting power is diluted across many districts to reduce their voting power in that district. Packing is when a party’s voting power is grouped into one district to reduce their voting power in other districts.

The Illegal yet Persistent Life of Racial Gerrymandering

The political question doctrine is the doctrine that if the courts, which are typically viewed as the apolitical branch of government, are presented with a case that is so politically charged then they should not rule on the case. In the case Rucho v. Common Cause the Supreme Court “ruled that claims of unconstitutional partisan gerrymandering are not subject to federal court review because they present non-justiciable political questions”. This cemented the decision that allows for political gerrymandering to exist without a proper check against it.

Regarding this current issue with North Carolina’s political gerrymandering that the Republican party conducted to both pack and crack Democratic votes was largely successful. Despite having a 48.6% Democratic voting population, the Republican party locked 10 out of 14 congressional seats. North Carolina’s 6th congressional district has an overwhelming Democratic population. Previously, in the 2020 election, Joe Biden won the district by 24 points (shown below). 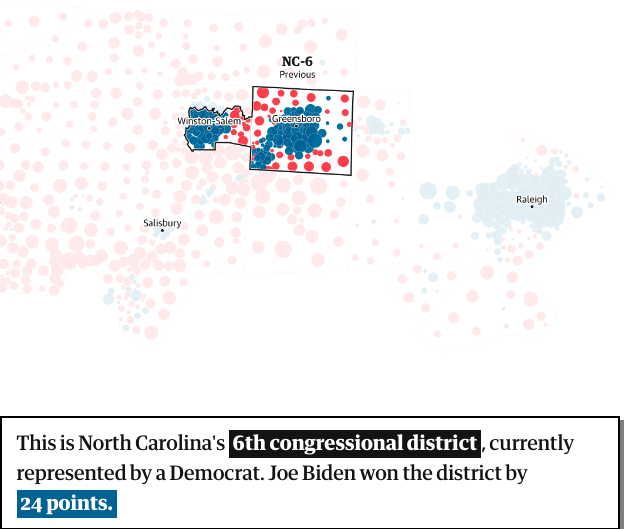 However, the new district lines (dark lines) drawn by the NC legislature (shown below) cracks NC District 6’s Democratic population into several districts which dilutes their votes and makes their districts be controlled by the Republican party. 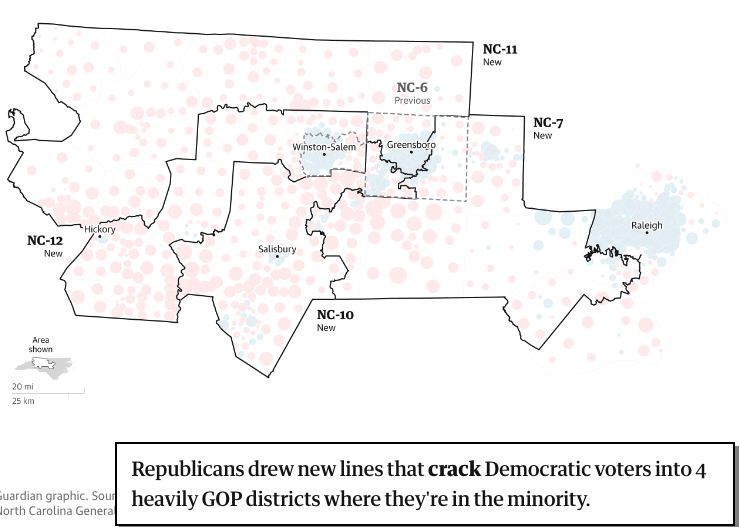 This results in the voice of the Democrats becoming silenced because of the dilution that has been put into effect with the new congressional district lines.